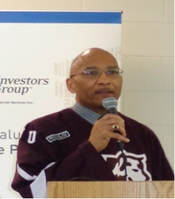 Sportswriter, Diversity Management Consultant and Black Hockey Historian
"All people have something to contribute to society. It's not what a person doesn't have, it's what      they do have to offer that's important to help make a difference."
﻿﻿﻿


Born in Dartmouth, NS, Bob Dawson, an all-round athlete, excelled in baseball, basketball and hockey. On the latter, he was the “first black” in 1967 to play in what was then the Atlantic Intercollegiate Hockey League (AIHL) with Saint Mary’s University in Halifax. While accepted and respected by teammates, he was often the target of racial slurs by spectators and opposing players as well as physical abuse by the latter. Later, Darrell Maxwell (Truro, NS) and Percy Paris (Windsor, NS) joined Bob on the Huskies making Saint Mary’s the “first and only Canadian university” to have 3 black players on the same team and at the same time. To add to that distinction, during a game at Mount Allison University in Sackville, NB in 1970, Coach Bob Boucher put the trio together on a forward line to become the “first and only all-black line” in Canadian university hockey. The trio played together again in a few other league games.

During Bob’s stint with the Huskies from 1967 to 1971, he helped the team win AIHL conference championships in 1969, 1970 and 1971, and go on to represent the league at the Canadian Intercollegiate Hockey Championships. Former NHL player Lowell MacDonald of the Pittsburgh Penguins, who was completing his degree at Saint Mary’s, saw Bob play and felt that he had the talent to play in the NHL, if given the opportunity. The NHL, however, had what appeared to be an unofficial policy of exclusion against blacks between 1961 and 1974. After Saint Mary’s, Bob played Intermediate and Senior Hockey for several years and was considered one of the top defensemen in the leagues.

Rather than pursing a career in hockey, Bob went on to Dalhousie University where he graduated in 1973 with a Masters Degree in Social Work. After graduating, he joined the federal Public Service of Canada where he worked for 37 years in human resources management in the areas of (a) career development and talent management, (b) employment equity (EE) and diversity, and (c) recruitment and staffing. For his contributions in employment equity and diversity, he received the Public Service Commission’s Excellence and Bravo Awards, and the Public Service of Canada’s Michelle Comeau HR Leadership Award.

While living in Ottawa since 1980, Bob has worked with community groups and organizations, and law enforcement agencies in Ottawa on issues related to employment equity, racism and discrimination, race relations, and police-community relations. As a member of the Ottawa-Carleton Area Police Community Council, he helped develop the “Community Partners in Action”, which was a strategy for the prevention, management, and resolution of critical incidents involving the police, visible minority and Aboriginal communities. While on the Executive of the National Capital Alliance on Race Relations, Bob developed and implemented the “Police-Minority Youth Program” to improve relations between the police and youth in the visible minority community. In recognition of his work with the police in the areas of personnel policies on race relations and diversity,
and police-community relations, he received a Civilian Citation and Community Service Award from the Police Services Boards of Gloucester and Ottawa.

As a senior sports writer for Box Score World Sportswire, Bob has written numerous articles on blacks in various sports, particularly hockey. He also has appeared on local TV and radio shows to talk about issues on blacks and hockey. In January 2015, Black History Ottawa presented Bob with the John G. Dennison Award for excellence in the study, preservation and promotion of Canadian black history and heritage. He, along with his former hockey teammates at Saint Mary’s University (Darrell Maxwell and Percy Paris) were featured in Sportsnet’s video The First All-Black Line in Canadian University Hockey that aired nationally in February 2015 on “Scotiabank Hockey Day in Canada”. Moreover, Bob received the Pioneer Award in June 2015 for achievements in hockey from the Multi-Ethnic Sports Hall of Fame.

Bob continues his passion for hockey and plays in the Ottawa Senior and Kanata Masters Hockey Leagues. He is a member of the Ottawa Independent Writers. In addition, Bob is on the Executive Board of SONAHR (Society of North American Historians and Researchers). He is also one of the founding members of the Black Ice Hockey and Sports Hall of Fame Conference series in Dartmouth, NS.